Where To Do Yoga In English in Buenos Aires

If words like ardha chandrasana, virbhadrasana II, and adho mukha svanasana weren’t enough in Sanskrit, attempting to chill out and yoga in South America presents new challenges for the non native speakers.

How are you supposed to understand “breathe through your solar plexus and smile with your left big toe” in Spanish?! Luckily, Buenos Aires has a couple of solid options for yoga classes in English that will allow you to avoid the embarrassment of jumping into that tongue-out lion pose while everyone else is in humble downward dog. And they can even be great for locals who do want practice “left big toe” for their English class.

I picked up a few classes at the studios offering English yoga and here’s what they’re all about.

“We want to demystify yoga and bring it closer… to take a step away from having it be very traditional and figure out how we can bring it closer to esta cosa occidental so that we can make it more accessible.” — Luciana Sticotti, Co-founder, Yoga Project BA

Co-founder Luciana Sticotti and English yoga instructor Natalia Porras Sivolobova, from Argentina and Mexico, both discovered yoga during stints living in New York City. This, and the fact that both are also long-time dancers, gives a unique flavor to what they offer at Yoga Project BA. For them, it’s about incorporating calm into the otherwise frenzied urban environment, about creative movement, and about variety. “I want this to be a place where we can just be,” says Sticotti. “To recognize our bodies, to be present. A little space where we can try things and see what happens.”

When she came back to BA from NYC, Sticotti noticed the conscious living movement that was just beginning to blossom in Buenos Aires and wanted to do something to support it. With a friend, she co-founded yoga clothing company Lulea, the idea being that it could help to “create connections between the different yoga studios in the city, to weave them together.” In 2015, Yoga Project BA began to hatch from Lulea, starting out as occasional free classes in the Lulea showroom and then coming into its own as a yoga school.

Near the Palermo-Barrio Norte border, Yoga Project BA serves up 11 weekly yoga classes, with two dedicated classes in English. This studio incorporates a number of yoga styles into the schedule — “so that people can find what they’re most comfortable with,” as Sticotti explains. Currently, this includes vinyasa, ashtanga, and mysore styles, as well as vinyasa in English. “The project continues to evolve based on what the team brings to it,” says Sticotti. When Porras Sivolobova reached out to her last year to see if Sticotti would be interested in adding classes in English to the mix, the idea aligned perfectly with the studio’s mission of diversity. Dropping in for a class comes out to 150 pesos, with multi-class packs and a monthly unlimited option also on offer.

You walk into Yoga Project BA’s bright, cheerful studio, and you immediately feel refreshed. The interior decor is Scandinavian-inspired, and it intermixes with Eastern elements. The room opens onto a balcony of green plants with the buildings across the pulmón de la manzana as the backdrop, a nod to Yoga Project BA’s concept of finding a beautiful piece of calm within the city. During evening classes, the windows of the pulmón light up one by one like fireflies.

Each English vinyasa session taught by Porras Sivolobova is unique and playfully surprising. She plans sequences to be active and challenging (though still always appropriate for beginners) and it’s the kind of class where you find yourself in a new pose and wonder how you got there. The soundtrack is diverse, and another key element of the experience. “Music is very important in my classes,” Porras Sivolobova comments. “I use a variety of musical styles — there’s no restriction. But I also like to use silence — it’s another form of using auditory perception.”

With its roots in yoga clothing brand Lulea, the Yoga Project BA studio continues the relationship. Lulea gear — comfy, well-priced, and responsibly made — is available for sale at the studio. On Saturdays, the studio hosts special workshops, from acroyoga, to singing and yoga, to reiki, to meditation. “I want to incorporate all the artistic movement disciplines that can contribute to what we are doing here,” shares Sticotti. “I’m also really want to add more classes, so that we can have even more people with different perspectives experimenting and learning together.”

“Paying attention to something physical immediately brings in our awareness. Yoga can help us get in tune with our sensations and our bodies… be able to be our own authorities… think critically and be wise about what we take in.” — Meghan Lewis, Co-founder, Buena Onda Yoga

Buena Onda started as a yoga school for travelers who are exploring the world, down to be introspective, and in need a good stretch after nights in tiny hostel beds. English was the lingua franca. Over the years, the studio has evolved into an accessible yoga community for travelers and locals alike. Co-founder Meghan Lewis explains that the idea is to get over the assumption that “yoga is for vegetarians who don’t go to parties,” to overturn the concept that yoga has to be intimidating or exclusive — it can be for anyone.

When Lewis first set foot in Buenos Aires in 2008, she discovered a niche. “I wanted to do a little yoga, and there wasn’t much yoga going on here,” she tells us. She also observed that what was there wasn’t necessarily accessible for travelers. It was difficult to find good information online — getting to a yoga class was a matter of coming across a tattered flyer with a phone number and calling for information. “Who wants to pick up the phone when you don’t even speak the language?” Lewis empathized. So she found a space, put up a website, and Buena Onda Yoga was born. “If no one shows up, no one shows up,” she and her business partner figured. “But we will keep doing it.”

The two studio locations are right there among all the hostels in the top backpacker and expat neighborhoods, Palermo and San Telmo. Between them, the two locations offer 10 classes per week, including one class in Spanish and one class in yin style yoga. Everything else is vinyasa in English, taught by a team of seven dedicated international instructors. A drop-in class is $14 USD (currently about $240 ARS), with a much more economical 8-class pack as well as weekly, monthly, and 3-month unlimited options available. Continuity helps to create the sense of community that has always characterized the studio, while the different passes cater both to travelers just passing through Buenos Aires and to foreigners and locals installed here for the longer term.

In its history, Buena Onda has done some hopping around the city and adapted to different spaces. The current two locations are delightfully different, each with a unique personality and vibe. The Buena Onda Palermo studio is housed in unmarked espacio cultural Primer Piso, where students climb the stairs to the second floor to find decorative sculptures and shelves of artisan pottery, tango music drifting into the lobby from one studio and meditation tunes from another.

Meanwhile, taking class at Buena Onda San Telmo is like doing yoga in your good friend’s living room. The cozy studio is in one of those quiet, airy, historic residential buildings — the sort of place you enter and forget you’re downtown. In class, we dropped our bags on the cushy sofa and took our places on mats lined around a cozy wooden floor before beginning a class that was just the right balance of relaxing and satisfactory, led by Amie Burrell with lots of excellent cues and a soundtrack that seamlessly flowed from meditation track to folk tune to African rhythm.

Every Thursday, the San Telmo Buena Onda Yoga space fills with delicious aromas and spice as it transforms into Jueves a la Mesa. The vegetarian closed door restaurant came into existence shortly after the yoga studio did. “I was already cooking for people,” Lewis recalls. “So the puerta cerrada was such a natural thing to do — and it was an extension to what Buena Onda was already offering.”

Because a fair number of students are in Buenos Aires only temporarily, Lewis is extremely passionate about finding ways to maintain the connections among those who pass through and become part of the Buena Onda Yoga community. She has been running a blog on the studio website, and this past winter, she kicked off the Buena Onda podcast. In each episode, she interviews musicians from across the Americas about their perspectives on wellness, creating links across cultures and disciplines. 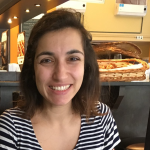