Fiscal responsibility and further adjustments will mean this drop will continue

Sadly for many, there has been a two-month consecutive decline in employment in the public sector. According to reports, this is the first time this happens since Macri took office. Disproportionately, between May and June there have been 10,600 layoffs in the public sector.

And what’s worse, according to official forecasts things aren’t going to get better, with the downward trend continuing through until next year as tight fiscal policies are implemented. The adjustment that the Casa Rosada foresees on the budget bill will also directly impact the levels of employment throughout the country.

Those in the public sector have seen the most visible decrease in employment. In December 2015, when Cambiemos defeated the Frente para la Victoria, there were 260,000 employees under the public sector umbrella. In July of this year, this figure fell to 206,856 employees, a figure that was confirmed by the Secretariat of Modernization.

UPCN, another major union that carried an unemployment survey in the public sector said there were 20,000 layoffs in both permanent and temporary contracts since Macri rose to power.

José Anchorena, director of Statistics of the Secretary of Labor, suggested that “From January until now, there has been a slight fall in employment in the public sector, which has been felt nationally for two years,  but now it is beginning to be felt in the provinces and municipalities, where the tendency is to continue increasing the amount of staff, although at lower rates.”

Public sector workers in the Argentine interior increased from 1,508,500 to 2,283,895 between 2005 and 2015, according to data published by the Secretariat of Modernization. In June 2018, those working in the public sector increased to 2,309,245 employees. This has suggested that although the figure increased, growth rate has indeed decreased dramatically. Similarly in the municipalities, employees went from 414,700 employees in 2005 to 442,560 in December 2015. Today, public sector employees currently stands  at 453,799.

In light of these statistics, it’s important to convey that the nation is currently the locomotive of the fiscal responsibility plan, i.e. the Argentine government is trying to balance out its spending and taxation. “The governors are more cautious because the impact on regional economies can be so great that they prefer to avoid a crisis, which is already occurring,” explained Daniel Catalano, leader of the ATE in the Capital. 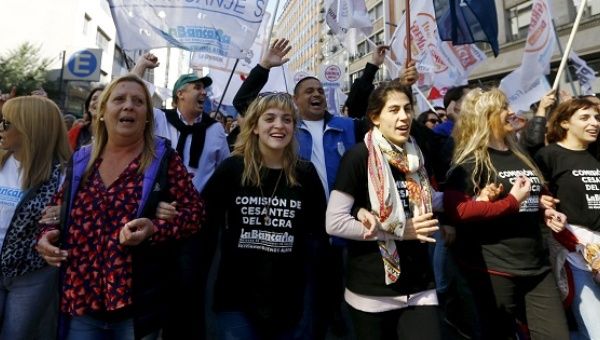 These layoffs have obviously caused unprecedented conflicts. Daily protests have increased. We have seen dismissals in Agroindustria, Hospital Posadas and the state news agency Telám. ATE and UPCN have both managed to encourage more politically disengaged areas to take action.

“We would like to talk with UPCN, but this has yet to be achieved, for us no layoff is justified, because there is not one area in which we could show that the people were fired for not working,” said Catalano.

Andrés Rodríguez, leader of UPCN, has acknowledged the aggressive cut in jobs between 2016 and 2017, but also the later “more selective” layoffs. Additionally, he warned that the concern about lack of job stability has been further reinforced by salary uncertainty.