Do you hear that? The faint but persistent siren song of a three day weekend, beckoning you away from your productive Wednesday to-do list and luring you to our insanely jam-packed live music agenda? Why, it’s almost enough to forget that this entire year has been a whirlwind of mostly terrible things, punctuated only by the unpleasant realization that time still flies even when you’re not having fun. So you better get to these shows while you can (you’re getting old!).

Fun fact: The immaculate conception is almost certainly not what you think it is. Yes, that’s right, it’s a Russian nesting doll of holy vessels situation! Religion is fun.

The long anticipated Freaks & Folks is here, with a lineup consisting of four of the most accomplished artists in the Buenos Aires folk scene. Singer-songwriter Karina Vismara, folk  musician Dani Ferretti, drone folk act Diente de Madera, and British folk singer songwriter Betty Blight will all be bidding adieu to this dreary 2017 in the best way possible: with live music shows that will delight our ears and help us heal from this feverish nightmare of a year.

The long holiday weekend is almost here and your restless body is asking you for a fix of live music. Luckily, we’ve got just what the doctor prescribed. Santi Azpiri’s melancholic lo-fi bedroom pop project Jun10r will be playing some songs from their latest 2 EPs ‘Fuego’ and ‘Aire’ and some new stuff as well, along Marton’s intimist brand of guitar indie rock, and actor Nicolás Mateo and his new band. In addition to all things live music, there will also be fanzines galore by Vet An, Fichu, Empatya, DECH, Alféizar y No Quiero Ser Tu Beto.

Power trio Terios, stoner rock band Bahía Blanca, and garage punk act Custom Serie will all be turning it up to 11 for the first edition of the Fuzz Killer Fest at La Colorada. Once the show’s over, you can stay and dance to a 70s/80s hard rock DJ set.

OID NOS closes 2017 with two shows in the same experimental vein that has made this concert series so interesting to begin with. On this occasion, electroacoustic krautrock trio Estados Sonidos and instrumental ambient band ORDEN will be playing live sets that challenge and enthrall audiences in a way that brings a little tear to our eye.

Have you ever wanted to rent an island and chill with a bunch of electronic music artists? If that’s the case, you’re kind of a weirdo, but your prayers have been answered. Promoted as an eco-friendly encounter of friends and like-minded spirits on the Delta of the Tigre river to enjoy music, food, and drinks, ISLA festival is back this year with a pretty extensive lineup and a fair amount of face paint and glitter. There will be performances by Barrio lindo, Uji, Jin Yerei, Don Plok, Villa Diamante, San Ignacio, Barda, SidiRum, Pinchado, DJ Chifle, Juan de Borbón / 7vestidos, Pol Nada, Dj Mica Towers, Salvia Divinorum, Vj Lula DelCraneo, Felipe MD, Cigarra, and BirdzZie plus a showcase by Tropical Twista Records from Brazil and many other surprise guests.

Paranoid is back for its 7th edition, and this time, things will get extra weird. Instrumental post rock band fusibles and math rockers Hungría will both be performing live music, and there will also be live vinyl DJ sets by Cobra Rod (POSEIDOTICA), Hernán Espejo (Compañero Asma / Bandera de Niebla), and Alejandro Castillo Leonelli (Gogogoch).

Self-advertised as ‘the most powerful show on the entire planet’, the artist/performer known as LOUTA will be transforming the the lovely Xirgu Espacio Untref into his own personal living room for a show in which his charisma and theatrical antics will be at the center of the stage. He’ll be playing both Friday and Saturday, sponsored by El Nuevo Manantial / the University of Tres de Febrero. We highly recommend following him on instagram. Polo shirts and weirdness abound.

For its 14th installment, Ciclo Puerto Nuevo presents a varied lineup comprised of folk n’ roll band Excursionistas, afrobeat combo Antropofónica, and dirty blues revivalists Gualicho Turbio. On top of that, there will be a live DJ Set by Rolando Bruno, record stands by Noseso Records, El Club de la Serpiente, and, of course, Minima Discos. As usual, there will also be expos by visual artists Byron Hasky and Sofía Lozano Macedo, who will be showcasing their art.

For its 18th edition, Dark Side of the Party celebrates making it to the end of the year with a trio of local indie legends that need no introduction whatsoever. Post-punk band Pyramides,  post rock vets Temporada de Tormentas, and indie rock champions Atrás Hay Truenos will all be playing live music shows to end 2017 on a high note. There will also be art expos by photographer Laura Layana, illustrators Agostina Carbonazzo and Lola Varela, DJ sets, and a record stand by Fuego Amigo Discos so you can get some early xmas presents for your loved ones.

For its 9th edition, TUL presents a synth-alicious selection of bands to dance away the doom and gloom of the year that’s about to end. Upbeat electro pop band Ascensores, new wave-y synth pop outfit Neon Algo, noise pop duo Re Signados, and dark synthwave act Telefonema will be all playing live music shows at La Cápsula, a secret location in Palermo (what’s life without a little mystery amirite?).

A new concert series is born! Fiesta Extranjera rears its head for the first time ever with space rock trio Dallas música, indie rock band PALMER & Los Extranjeros, and folk singer songwriter Tarsitano. In addition to the live music shows, there will also be live DJ sets and a record stand from Minima Discos.

Dinámica – Festival de lo nuevo began as a celebration of all things related to new music and art. For its 15th and final edition, we’ll be graced by the performances of instrumental rock band Baldío, psych-rockers Filo, and P122A, a band we know nothing about except their love for the universally famous Italian dish. Sola Con Mi Alma will open the evening with an acoustic set, and artist Chandelle Nicole will be showcasing her art as well. 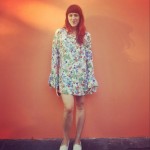