This year’s Copa America will soon crown either Argentina or Chile champion. In hosting, Chile has played all of its matches in the expansive, open National Stadium in Santiago. Its atmospheric stands are uniform, curving slices of concrete piled on top of each other and ringing the pitch like contours on a map. And every time Chile plays in this tournament, the stands are transformed into heaving seas of red as the fans cheer “La Roja” on.

But there is one small section in the stadium ordinarily packed to the rafters that stays empty — a tiny cordoned-off section left virtually untouched, where the original wooden benches (there since the stadium was opened in 1938) remain. It’s perhaps the most eerily poignant detail in the Estadio Nacional that pushes home the memory associated with the place.

These benches were still there when, in 1973, the new military regime fronted by General Augusto Pinochet rounded up and arrested thousands of Chilean citizens and forced them into the arena, turning it into a de facto concentration camp. The Pinochet regime had swept to power in a coup on September 11 (an ominous date for Chileans and socialists long before the new millennium) of the same year. It ousted the democratically elected socialist government of Salvador Allende — who shot himself as the presidential palace from which he refused to flee was being bombed — with the express consent and covert assistance of then US President Richard Nixon and the CIA.

The Chilean army round up political prisoners inside the stadium, 1973. Image: santiagonostalgico via flickr.com

The US involvement helps explain why so many of those forced into the stadium at gunpoint in 1973 were socialists and other political opponents of the new Pinochet dictatorship, which was fascist while also being utterly committed to US-led neoliberal economics and free trade. During the Cold War, the United States government favored regimes like this as it sought to stamp out non-capitalist governments and social movements wherever they appeared, from the jungles of Vietnam to the beaches of the Caribbean, directly or indirectly leading to the deaths of estimated millions in the process.

Chile was no different. Fascism was installed with US support and the new dictatorship soon set about rounding up the many thousands of loyal Allende supporters who were turned into dissidents the day he was murdered.

Over the 17 years of Pinochet’s dictatorship, concentration camps were set up around the country, many in vast open spaces like the Atacama Desert, where mass graves are still being found. But in the first few months, there was less of the meticulous, calculated infrastructure of fascism that would, just like in neighboring Argentina, later reach its tentacles across the whole country.

Consequently, the National Stadium in 1973 showed the brutality of Pinochet’s regime in embryonic form. Yet while the setting may have been improvised, the targeted cruelty was not. As one prisoner who was murdered inside the stadium said before his death,

“They carry out their plans with knife-like precision.”

This detainee was Victor Jara, a folk musician and vocal supporter of Allende who soon found himself a special target of the uniformed regime thugs who ran the stadium after he continued to sing his hope-filled songs in an effort to keep prisoners’ spirits up.

Like most of the other 41 people who were killed during the two-month spell between September and November that was the height of the National Stadium’s use as a concentration camp, Jara was tortured repeatedly before being shot. Reports say that the guards, concerned with his music and standing among the other inmates, elected to tear his fingernails off and then force him to keep playing in between the beatings that were routine for all the men and women inside.

Two days before his death, Jara managed to scribble a final poem down that was later smuggled out of the stadium in a shoe. It’s as good a testament as any in allowing us a view back into the Estadio Nacional’s dark past. (See below).

Efficiency in torture and repression was of paramount importance for Pinochet’s dictatorship, especially in the early days, when fear of mass dissent from a people who had recently voted for a radical socialist government bred constant paranoia for the fascists. Almost as important for them, though, was making sure the crimes and systematic human rights abuses they were orchestrating were hidden from outside view. 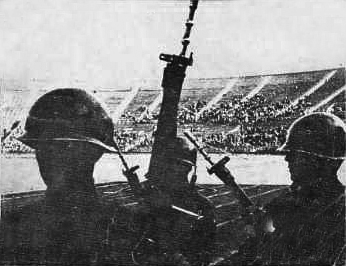 As the United States’ latest ally in the fight against “international communism,” the dictatorship had to appear respectful. Indeed, many former US politicos and economists (the so-called Chicago boys sent in to privatize the entire economy) who worked with the Pinochet government continue to deny its crimes, just as the top Western politicians including Margaret Thatcher and Ronald Reagan did in later years. Neoliberal solidarity at its most shameful. (Video footage: Thatcher praising Pinochet for “bringing true democracy to Chile”).

The forced labor and concentration camps had to be kept a secret from foreign eyes if the new regime was to avoid international pressure. This barefaced cover-up applied within the stadium too. The prisoners were sent into the bowels of the arena — the changing rooms and lockers — whenever the guards got anxious and particularly whenever an event or visit was scheduled to take place above.

In one instance during a World Cup qualifier, when Chile was set to play the Soviet Union in the National Stadium, the Soviet team and players refused to participate, having correctly heard or deduced that the entire edifice was being used as an internment camp for political prisoners.

They rebuffed demands to play the match at the stadium, accurately labeling it, “A place of blood.”

In the end, FIFA belatedly sent inspectors over to review the complaints, but all the prisoners were hidden below the pitch (the only bit the inspectors really looked at) and the match went ahead.

This was problematic, since the Soviets boycotted playing on human rights grounds. But FIFA in its infinite wisdom insisted that the match go on anyway. With fellow citizens imprisoned, beaten and tortured under their feet, the Chilean team lined up against an empty field and scored in the open goal to secure their World Cup qualification — a farce that might have been funny were it not for the inhuman foundation it was built upon.

The stadium’s Jekyll and Hyde existence as concentration camp and national sporting arena ended soon afterwards, in November 1973. Despite the widespread knowledge of his regime’s brutality, it was too high a risk of bad press for Pinochet. By that stage, the infrastructure of clandestine facilities hidden from public view was growing and the tortures, beatings and murders continued in less visible concentration camps.

Today, a small museum under the stadium bears witness to what happened there in the months following the abolition of democracy. But, according to a recent article run by The New York Times, many of the survivors feel like it isn’t enough. Indeed, it isn’t clear how many of those watching this year’s Copa America outside of Chile are even aware of the stadium’s past at all. This might change through a better memorial in the stadium itself, like Néstor Kirchner achieved in one of Argentina’s former detention facilities, turning the ex-ESMA building into a human rights museum. But perhaps more important is that we remember the testimonies of those who survived the horrors of fascism. Victor Jara’s final poem is a good place to start.


There are five thousand of us here.
In this small part of the city.
Five thousand.
How many of us are there in all
In the cities and in all the country?

Here we are, ten thousand hands
Who plant the seeds and keep the factories running.
So much humanity,
hungry, cold, panicked, in pain, under moral duress, terrified out of their minds!

Six of ours lost themselves
In the space of the stars.
One man dead, one man beaten worse than I ever imagined
It was possible to beat a human being.

The other four wanted to free themselves of all their fear.
One jumped into the void to his death.
Another beat his head against the wall.
But all had the fixed look of death in their eyes.

What fear is provoked by the face of fascism!
They carry out their plans with knife-like precision, not giving a damn about anything.
For them, blood is a medal.
Killing is an act of heroism.

My God, is this the world You created?
Is this the product of Your seven days of wonders and labor?
In these four walls, there is nothing but a number that does not move forward.
That, gradually, will grow to want death.

But my conscience suddenly awakens me
And I see this tide without a pulse
And I see the pulse of the machines
And the soldiers, showing their matronly faces, full of tenderness.
And Mexico, Cuba, and the world?
Let them cry out of this ignominy!

We are ten thousand fewer hands that do not produce.
How many of us are there throughout our homeland?
The blood of our comrade the President pulses with more strength than bombs and machine guns.
And so, too, will our fist again beat.

Song, how hard it is sing you when I have to sing in fear!
Fear like that in which I live, and from which I am dying, fear
Of seeing myself amidst so much, and so many endless moments
In which silence and outcry are the end of my song.
What has never been seen before, what I have felt and what I feel now
Will make the moment break out…