Protest Outside Russian Embassy Against ‘Gay Concentration Camps’ In Chechnya

Yesterday saw a protest in front of the Russian Embassy in Buenos Aires, in light of recent allegations of ‘gay concentration camps’ in Chechnya. Groups making an appearance at the event included the Argentine LGBT Federation (FALGBT); La Fulana, an organisation for lesbian and bisexual women; Argentina’s first gay rugby team, Ciervos Pampas Rugby Club, and many more. The event began at 5pm outside the embassy in Recoleta. Police put up barriers, which the protesters festooned with banners calling for an end to homophobia, freedom for the Argentine prisoner Higui, and in protest of Russian, Argentine and US governments. The event included an open mic for people to make speeches, as well as amplifiers playing music.

At around 5:30, this guy came out onto the balcony of the embassy:

His affiliation with the embassy and motivation for filming were unclear. He didn’t express any audible opinion of the proceedings. Passing members of the public were more vocal; one woman going past made her disapproval known audibly.

Pink triangles were passed around for members of the congregation to write messages on and affix to themselves or the barriers. One attendee used theirs to write this message to Putin, pointing out the irony of his name’s similarity to a certain Spanish word:

The Ciervos Pampas Rugby Club brought tackle pads with the faces of Putin and Kadyrov, leader of Chechnya, and the legend “Tackle homophobia”, for people to vent their anger against the regime. This became more of a problem as the crowd got bigger and attempts to tackle turned into knocking people over in a domino effect. A member of Ciervos Pampas took the mic to introduce the organisation, which he said was dedicated to fighting homophobia on all fronts.

Crowd size peaked at about 6pm, with around 300 people in attendance. 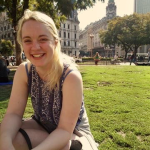