Speak and Sip Like a Local with ‘Mate Club de Conversación’

A relaxed, welcoming way to improve your language skills.

Picture this: you’re new in the city. You speak basic castellano at best, meaning that you are basically as helpless as a newborn kitten. On top of that, you haven’t yet met friendly locals to take you under their wing (like that mother hen in the gif, you know the one). Well, let us friendly folk at The Bubble direct you to your new adoptive home away from home: Mate Club.

Run by a team comprised of both extranjeros and locals, Mate Club de Conversación is probably the best place to go to practice your conversational Spanish in a low-stakes environment, where no one will judge you for your horrific blunders.

The event takes place in bars in Palermo on Saturdays and Barrio Norte on Tuesdays and Thursdays. Upon arrival, an organizer welcomes you, explains what’s going to happen if you’re new, and seats you at one of the tables with several other people, all of them proficient in either English or Spanish.

As soon as the meeting begins, your group will start chatting in English and Spanish in alternation, for 15 minutes each. Since all of this chatting works up an appetite, there’s unlimited toast, dulce de leche, jam, butter, and of course mate to keep your brain on point through all of it.

All of it is organized by a team of dedicated people, porteños either by choice or born-and-raised. Rodrigo de la Mano, co-founder of Mate Club, belongs to the latter. Together with Nahue Trípodi, he developed the idea for the group 2012.

The first meeting, already with the same structure as today, took place in a small niche bar owned by Trípodi’s brother-in-law. The duo spread the news about their meetings via social media and with the help of friends and family members, who made a massive effort every time to get more people to the gatherings. In the beginning, due to the constraints of the bar, that amounted to about 20 participants; since then, the reach of Mate Club has substantially grown.

“These days, we get around 40 people on weekdays, and around 60 on Saturdays,” says Rodrigo. The maximum number of seats depends on the bar; generally, the upper limit is around 75 people. However, in the spirit of hospitality, the team will always try to fit everyone in.

Meetings are always attended by a colorful, diverse assortment of people from all over the world. Tourists, exchange students, and long-time residents come together with locals to share a mate and exchange stories. There’s no age limit: participants are most often aged 20-40, but Rodrigo also recalls seniors aged up to 70 attending and enjoying themselves.

Interestingly, many of those who now work as organizers for the meetings started out as participants. Heather Barber, who moved to Buenos Aires in 2016, is one of them. “I still remember the first person I was seated with,” she recalls with a smile. “We’re friends to this day!”

For Heather, one of the most significant things about Mate Club is the extraordinary community that has formed around it, both within the team and among many of the regulars. “Before I got here, work was always separate from seeing my friends,” she says. “Now, I get to be with friends, at work.”

With Mate Club, both she and Rodrigo have realized a dream of working with people from all over the world. However, it very much remains a labor of love to this day. To make ends meet, all of the organizers work additional jobs. Heather, for example, is an English teacher; Rodrigo works in tourism and as a musician. “Your heart has to be in it,” he affirms with a laugh.

Rodrigo was motivated to start Mate Club by a wish to bring people together and break down walls between people from different countries. “There’s a lot of bias against immigrants here,” he says, “and we just wanted to show people: Hey, that guy is just like you. He wakes up every morning and goes to work. The only difference is that he was born on the other side of the world.”

He continues: “Someone from another part of the world has a different perspective on the world. It’s so important to listen to that opinion. It’s our goal to make that kind of exchange happen in a comfortable environment.”

Of course, being in Argentina, the sharing of mate is a central part of these conversations. “Once you get the people to share that moment, the mate does everything for us,” Rodrigo says, laughing. For him, passing around a mate embodies the spirit of Mate Club: sitting down together, everyone on the same level, trying to understand one another. Here, drinking mate is an occasion to come together and talk as friends. “I think these days, it’s very important to bring diverse perspectives together and create a dialogue,” Rodrigo explains.

Through the efforts of the dedicated team, Mate Club has become a wonderful space that welcomes people from all walks of life. If you have some time to spare, give their meetings a try. You might just make new friends, meet people from all over the world, and you will most definitely have a great time. 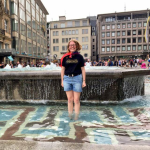