MALBA’s Agustín Pérez Rubio: How to Make a Museum Feminist

Agustín is everything you might imagine an artistic director to be: he dresses in a European fashion, with a double breasted blazer and tailored trousers. He orders a cortado, sin leche. He has a flock of young assistants who bring coffee and escort visitors around. He gesticulates wildly. He’s charismatic and theatrical.

But Agustín is not your typical artistic director.

Four years ago, he took the helm at MALBA, the Museum of Latin American Art of Buenos Aires. Before his appointment, the museum’s last hanging collection was 17% women artists, with art from only 7 countries. Now, after his four-year reign, 46% of the current collection is from female artists, with works from 12 or 13 countries. I met the curator-turned-artistic-director at MALBA to find out how and why he changed the face of one of Buenos Aires’ biggest institutions.

Reading about him, I was immediately struck by the fact that a male artistic director would take such an overtly feminist stance. How did he arrive at this philosophy of inclusiveness and diversity?

During his two PhDs (Philosophy and Art History) and under the guidance of a radical feminist university lecturer, Agustín tells me how he read Kant, Hegel, Oscar Wilde, Julia Kristeva, and Donna Haraway, and so came to see curation as an opportunity to “construct another kind of reality”. He wanted to take down the colonial idea that art history “is the one with the capital H and A”, that “embroidery was something girly, while casts and big sculpture were important”, and build an intersectional, queer, feminist art philosophy.

“Being gay, as I am, and coming from a strict Catholic background,” Agustín tells me, “I see that the patriarchy and heteronormativity are things that we have to break with. Looking at the art cannon we must think, ‘Yes: But who else is there?'”

This is a question which Agustín has tackled directly. The day that he left his previous position at MUSAC, the Museum of Contemporary Art of Castilla and Leon, there were five women’s exhibitions in display. “People were saying ‘you do a lot of programs with women, what’s happening?'” and I thought, “What would happen if it was men? Would anyone ask ‘How come you’re displaying so many men?’ No, it would be normal, nobody would notice.’

The question ‘who else is there?’ also vibrates through Verboamérica. To quote Agustín, “We were very conscious that you can’t only be political in an academic way, in a conceptual way; you have to show up and participate’. His words remind me of a poster in Verboamerica by Jesús Ruiz Durand, which proclaims ‘Revolución es participación’, revolution is participation:

‘Revolution is participation’. A poster by Jesús Ruíz Durand, from Verboamérica.

Agustín believes that museums as well as universities are spaces where society can work towards decolonizing itself. And while decolonizing and diversifying the wall space sounds great, how can one make museums a more inclusive space for someone who might feel excluded from the art world?

Agustín tells us that with this in mind, the MALBA is free to public school groups, people from social projects, and on Wednesdays, to all students. To add to that, the might-be-called-dense-and-academic-language is rendered inclusive by the accompanying glossary of terms and definitions, to which visitors can also add their own terms.

Another challenge to accessibility is the different audiences that museums are faced with. Agustín’s philosophy about it is best represented by the metaphor he chooses for the museum: an extension cord. He converts art into as many different outlets as possible, to make it accessible to as many people as possible. “Our public is not one,” he tells me. “I’m not talking to or creating exhibitions for just ‘art people’ or academics, because the feminists will come, the bankers will come, the families will come, and it’s our duty to be as flexible as possible.”

We can only hope that others in his position follow suit. 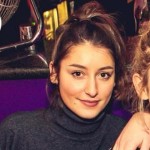