Lollapalooza Argentina: The Right Way to Do a Festival

I want to give Argentina a big round of applause for the relatively quilombo-free festival experience I had this past Tuesday, April 1. I have been to a few since I relocated to Buenos Aires, the Pepsi Music Fest last year and the last two Creamfields, and Lollapalooza blew all previous logistical experiences out of the water. The breadth and depth of acts at Lollapalooza Argentina was notable as well. The original Lollapalooza held annually in Chicago, Illinois is focused on indie rock. The same theme pervaded Argentina’s version, but with a heavy smear of electronic, punk, dub reggae, folk, pop, and hard rock on top.

Last year’s Creamfields served as an example of how the entrance process to a festival should NOT proceed. My friends and I went through, more or less, nine rounds of security and ticket checks, which were arranged in labyrinth form surrounding the grounds. I guess the plus side of that was that we felt like we had accomplished something once we reached the entrance. Did I mention we waited in line for almost two hours?

Those of us that call this lovely city our home know just how impressive Argentines’ line formation and maintenance skills are. If it was an Olympic sport, they would take home gold without fail.

Professionals at their craft, Argentines consider the line a sacred thing that deserves endless respect.

So I suppose this was just another day in the life of for them, but every bit of gringo gab I heard that night included a lengthy whine session about the difficulty of getting in.

On the contrary, entering Lollapalooza was quick and reasonable. I didn’t wait in line for any amenity for more than 5 minutes. To be honest, I was blown away at the ease and cleanliness of almost everything. I’m still not ready to whip out an A+ quite yet, but the juxtaposition of Lollapalooza to my previous experiences begs for nothing less than an A. Props to you, Fenix Entertainment Group.

The festival was held at the Hippodrome in San Isidro, which functioned well as a venue thanks to the endless amount of flat and grassy space. 55,000 people attended on Tuesday, but I never felt crowded at any point.

There were four stages where the music was staggered throughout the day, beginning at 12:30 pm and ending just after midnight. Genres were well staggered so you wasn’t too much conflict over who to go see, depending on your tastes. It was apparent that many of the locals attending were not familiar with all the artists, namely the bands that formed any time after 1995. They seemed to enjoy themselves nonetheless. I find that be a common occurrence in general here. I remember dancing my face off to the Black Keys at Pepsi Music Fest while everyone else around me stood there placidly, waiting for Pearl Jam. I guess you have to find out about new(er) music somewhere, and these festivals with international acts are most Argentines’ first opportunity.

I’ll admit that my roots in music lay firmly on the hippier side of the line, which is why I sometimes overlook bands that actually deserve the time of the day. Moving to Argentina has been very beneficial for me in this way, because, guess what? Phish doesn’t tour down here. Read on to share in the glory of my day-long foray into genres I don’t habitually listen to, and the magic that ensued.

Confetti explodes during the pinnacle of Wolfgang Gartner’s set.

I began the day aimlessly wandering, catching snippets of different acts, people watching and soaking up some sun. While stretched out in the grass enjoying the eclectic songs of Cage the Elephant, I came to the hilarious and creepy realization that nearly one out of every three girls was wearing the same uniform: black pleather leggings, a red and black plaid shirt tied round the waist, a baggy, white tank top, all topped off with the signature flair of platform [insert whichever type of shoe here].

Those who always claim that airports have the best people watching have obviously never been to a music festival. Whether you dig the music or not, you cannot deny the entertainment provided by the sights.

My pick for Favorte Person at Lollapalooza was a man frantically waving a sign that read, “Mi ex arrunó este tema,” which translates to “my ex ruined this song.” So Argentine, and I love it.

I was incredibly surprised that I did not spot a self-made VIP area at any point Tuesday— every other festival or big concert I have been to in Argentina and Uruguay has been chock full of them. I’m sure some of you know what I’m talking about: a small group of people, all of whom will be wearing sunglasses at night, encircled in a rope. They essentially make it impossible to penetrate the barrier without falling on your face and making an ass out of yourself. If you haven’t figured it out by now, exclusivity is kind of a thing down here. But it was nowhere to be seen at this year’s Lollapalooza.

I also want to give a shout-out to the girl who was wearing the denim shirt with a row of emblazoned Bart Simpson heads. If I see you on the street one day, I plan on making it rain pesos. You will give me that shirt.

A friend pointed out a funny observation during Cage the Elephant. English bands used to mimic American accents in the world of rock— take the Beatles for instance. Oh how the tides turn. It seems quite en vogue these days for American bands to salt and pepper their lyrics with an English accent, Cage the Elephant being just one of the many examples. It’s a generalization, of course, but one I’d say is right on the money. 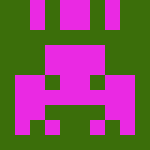