American multi-media artist Laurie Anderson is coming to Buenos Aires this week for the first Biennale of Performance.

So the question is, why should you care? What is so special about her? Come to think of it, what does ‘a multi-media artist’ even do?

Let`s start with the that last point. What makes a regular artist a ‘multimedia artist’ is the inability to work exclusively in the framework of one method, be it sculpture, painting, video or let’s say even performance. Laurie Anderson is an exemplary illustration of how an avant-garde performance artist can be a successful pop-musician, an inventor of experimental music instruments, both an actor and a film director, a dancer, a writer, NASA’s first artist-in-residence and a McDonald`s employee.

Her work is considered a bridge that connects the incomprehensible world of avant-garde art with pop-culture: when her piece ‘O Superman’ appeared on the British pop charts in 80s, pretentious art snobs still couldn’t criticize her idiosyncratic style as being too mainstream. For more than forty years, Anderson has been experimenting with various media to create her own universe of images, sounds and words that seems to exist on the border of an obscure absurdist dream world and reality, and it all began with a symphony played on car horns, the first piece she performed in 1969.

To get you ready for the upcoming show here is a Bubble curated selection of the essential Laurie Anderson performances:

Laurie plays cowboy songs on the ‘self-playing violin’ standing in ice skates with the blades frozen in ice. The performance ends when the ice melts away.

According to Laurie Anderson, a spoken-word performance “O Superman” is about the failure of technology. The artist wrote it after the accident that happened during the war in Iraq. American army sent helicopters to rescue hostages but they crashed in the desert and everyone was killed.

“Since the last forty years we have been fighting in the Middle East. The war has changed its name 17 times since this song was written in 1980, but it`s the same war and the same place and about many of the same things. War is our national industry. That was a moment when a big technology failed. What will hold you now? Who will catch you if you fall? The government? No, They won’t”  commented Laurie.

In 1986, Anderson directs the concert film Home of Brave that consisted of 19 songs. During one of them Laurie dances slow tango with William S. Burroughs. During the 90’s the artist creates two notable performance pieces, Nerve Bible and Moby Dick.

In 2003, Anderson got a call: she was offered to be NASA’s first artist-in-residence. Despite neither Laurie, nor guys from NASA knowing exactly what that meant or what the responsibilities she would take on were, Anderson decided to start with something she was good at. Thus the case inspired her performance piece, The End of the Moon.

Anderson also collaborated a lot with her husband Lou Reed. Her voice appears on such tracks as “Rouge”, “Rock Minuet” and “Hang on to Your Emotions”. Whereas Reed contributes to the Anderson`s pieces “In Our Sleep” and “One Beautiful Evening”.

Laurie Anderson doesn’t consider herself an artist, she prefers the term ‘anthropologist’. It`s not hard to believe her when you find out how far her research goes beyond the art field. Perhaps, the most conceptual life projects she realized were working on an Amish farm as a farmer and two weeks of work in McDonald`s. She says,

‘I began to think, “How can I escape this trap of just experiencing what I expect?” I decided maybe I would just try to put myself in places where I don’t know what to do, what to say, or how to act. So, I did things like working at McDonald’s and on an Amish farm, which had no technology whatsoever. There were different reasons for each thing. With McDonald’s, I went in thinking, “I’m going to see a factory.” How do you make things that appeal to a mass audience, whether you’re making hamburgers, or CDs, or whatever?’

The avant-garde artist who knows how to flip a mean burger and make french fries – the super woman, Laurie Anderson will perform in Teatro Opera on May, 8 and 9. 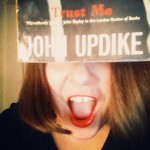