Yesterday in San Isidro, within the bright, two-room office of NorthRobotics, nine children between the ages of 6 to 9 built LEGO robots during the company’s very first robotics class since returning from a long vacation. These classes give kids an opportunity to have an absolute blast while learning programming, physics, and logic: essential skills in today’s world of gadgets, gizmos, and technology.

LEGO robotics kit to be used by some of the older students. (Photo by Jason Sheil)

Children are grouped by age: 6–8 and 7–9. Here, a child in the younger group uses a tablet to construct his robot. (Photo by Jason Sheil)

“There’s not that many places in Buenos Aires offering something like this,” explains Veronica Gaiteiro Fraiz, the program’s director. “For a long time, it was hard to get the LEGO kits in Argentina.” Fraiz has been offering courses at NorthRobotics since 2015, when her son wanted to learn programming and an easy option simply wasn’t available. Now, she runs programs every week, helping children develop an understanding of programming at an early age.

Code is written using a picture-based programming language, making it easy for young children to grasp. (Photo by Jason Sheil)

In yesterday’s class, the students created small robots designed to clear obstacles from their path and respond to remote commands. The kids code the bots using picture-based software released by LEGO. “They use icons to program them,” says Fraiz, “they don’t need to know how to read or write… they can start programming right away.”

Fraiz assists some of the older students before they attempt the day’s challenge. (Photo by: Jason Sheil)

Built and successfully programmed by the children, a robot clears obstacles in a maze at the end of the two-hour class. (Photo by: Jason Sheil)

After two hours, the children have built, tested, and put away their robots, to be dismantled throughout the day by NorthRobotics staff. According to Fraiz, the students will return for three more classes before the next semester begins in March with a new teacher. “We’ll have more [children] in March and we’re adding classes in English with our new [American] teacher.” Each class includes new challenges and aims to develop the children’s programming skills a little further. For sure, it’ll take a little more than just LEGO to develop Argentina’s next Steve Jobs, but at NorthRobotics, a strong foundation is certainly being laid.

Children in the younger group play with robots they’ve programmed to respond to external stimuli. These kids are repeat customers of NorthRobotics, and already have a basic grasp of programming. They have three more classes to go before they can take part in more advanced coursework. (Photo by Jason Sheil)

Want to learn more? Check out their website here. And no, they don’t take young adults whose niño interior is alive and kicking – trust me, I’ve tried. 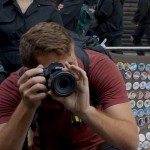