How To Museum Like A Boss: A Guide To Getting The Most Out Of Buenos Aires’ Art Institutions

Buenos Aires prides itself on being one of Latin America’s cultural epicenters, and it most certainly is. But with a museum around every corner, you’re bound to miss some of the more exciting exhibits that happen throughout the year. We got you covered though. Here’s list of what’s to come – and what’s already on – to help you get ready to hit the biggest museums in town before the must see exhibits are over.

Jorge Macchi is one of the most important Argentine artists today, and yet much of his work has never been exhibited in the country. The MALBA took it upon itself to amend that wrong. Behold Perspective: the first anthological exhibit of Macchi’s work ever held in Argentina. The show will cover his production since 1990 and will hold works as varied as the time periods during which they were made. From video installations and newspaper clippings to photographs and cartographies, all of which deal with the strangeness that interrupts our daily reality, this exhibit has got it all. Some of his work will also be exhibited at Universidad Di Tella.

When: until May 23rd in MALBA and June 3rd at Universidad Di Tella.

Visitors who go around the museum’s public space, which can be enjoyed without purchasing tickets for the rest of the exhibits, will be greeted by Jeff Koons’ statue Ballerina. The piece, as its name gives away, is a dancer made out of steel and glass meant to reference porcelain ballerinas from the 20th century. Unlike its porcelain counterparts, Koons’ Ballerina is over two meters tall.

And hold onto your hats – for two months – because Yoko Ono is coming to town with the first ever retrospective of her work in Argentina. The exhibit will be made up not only of the show in the museum itself, which Ono will travel to attend, but will also include work placed in public spaces, mass media and social networks.

Because fifteen years of Jorge Macchi at MALBA wasn’t enough, an installation by him is also scheduled to be featured at the Bellas Artes starting this month. It is called The Night of the Museums and has never been exhibited before. Its main characteristic is its use of light, which gives the installation, in the words of museum director Andrés Duprat, “something of a fictional movie.” It will be hung in room 27, next to paintings by the likes of Xul Solar, Rafael Barradas and Pedro Figari.

Room 27 is all set for Macchi’s new mysterious installation.

The Mexican Murals exhibit we we hoping might happen is actually happening! Featuring the three biggest names from the movement – Diego Rivera, José Clemente Orozco and David Alfaro Siqueiros – the exhibit will feature works dealing with nationalism, social and political issues, as was inspired by the very first murals making their appearance on public buildings back in the 1920’s. After a failed attempt of getting it up and running in South America during the seventies because of the various military dictatorships at the time, the exhibit made its way through Chile recently and is finally coming here in May. This is so much of a scoop, though, that it’s not even on the Bellas Artes’ website yet, so stay tuned for the official announcement of the exact dates.

If you were interested in exploring the work of some of the most important Argentine artists still alive and kicking, it’s your lucky day. Not only is Macchi everywhere, but Adriana Lestido, one of Argentina’s most important photographers and photojournalists, is at MACBA. The exhibit, called Algunas Chicas, explores the theme her work is best known for: womanhood, and the difficulties women face because of their gender. Her black and white shots of women with their daughters – many of which she took at a prison in La Plata – are breathtaking. Exhibit A:

A picture by Lestido from her series “Mothers and daughters”

When: until May 1st.

Marta Minujin just won’t go away. La Menesunda, which you’ve probably heard of at least a dozen times so far, is still on at MAMBA. Originally thought to last until February, it has been extended through May. Just in case you live in a Ziploc bag, let us go over it one more time. This insane exhibit is made up of a labyrinthic structure that takes you around eleven different scenarios one more trippy than the next. Dealing with a wide spectrum of artistic languages, it is not apt for people with claustrophobia or people suffering from heart disease. Which should give you a pretty good idea of what kind of an exhibit you’re working with here.

Things are about to get trippy. Picture by Josefina Tommasi. 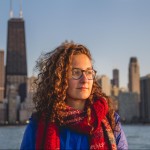