Graphic of the week: Cases down, BA lockdown lifted

After weeks of sustained slowdown in cases in Buenos Aires City and Greater Buenos Aires, Alberto Fernández announced last Friday the end of the mandatory lockdown in those areas, which will join the provinces of Jujuy, Catamarca, San Juan, Mendoza, Formosa, Misiones, Corrientes, Entre Ríos, Córdoba and La Pampa in a list of districts with smaller limitations on freedom to combat the COVID-19 pandemic.

As the table below shows, the 7-day rolling average of cases has been moving steadily down in the city (CABA) and most of its densely-populated surrounding districts, known in Spanish as “conurbano bonaerense” or Greater Buenos Aires (GBA) area, which are moving from red to green. Together, they form the Buenos Aires metropolitan area (AMBA), which was the epicenter of the pandemic in Argentina during its first few months.

Charting that evolution shows a similarly positive trend in the region, where around one third of Argentines live: 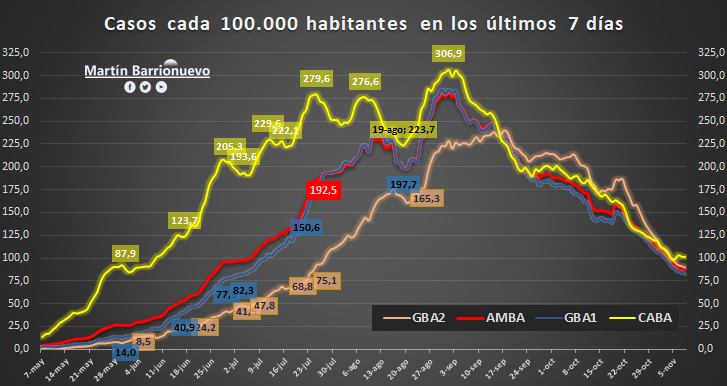 In practice, this means that, starting today, Argentines those parts of Buenos Aires or the 10 other aforementioned provinces can now circulate, work and do their daily activities with no need for state authorization, as long as the 2-meter recommended social distancing measures are respected.

This means that a few activities in particular, which tend to bring large crowds together, remain banned, such as cinemas, theaters, tourism and nightclubs, while public transport will remain only accessible to essential workers (and now also students). But many shops, restaurants and bars will be relieved by the news, knowing that they will be able to fully restart their activities, even though certain standards of ventilation, cleanliness and masking are still strongly recommended, and remain mandatory in several jurisdictions.

In a separate press conference last Friday, Buenos Aires City Mayor Horacio Rodríguez Larreta expanded on Fernández’s announcement saying that “our R number is down from 0.95 to 0.85, and the amount of occupied beds in hospitals has plummetted to 30 percent. With all this in mind, the National Administration has given us the greenlight to move from lockdown to social distancing. This doesn’t mean that we will relax, as we are seeing what happened in Europe, which is going over a second wave that forced them to cut back down on many activities.”

Schools are already gradually re-opening in BA City, although prioritizing open-air activities, as well as some well-ventilated museums and cultural centers, though not up to full capacity. Crucially, private gatherings and public events (such as weddings) will be authorized for up to 10 attendants in open places, and contact team sports such as amateur football will also be cleared if certain conditions are met, although players will not be authorized to use the usually poorly-ventilated changing rooms.

The lockdown, however, will continue in some districts of the rest of Buenos Aires province, as well as districts of Chubut, Neuquén, Río Negro, San Juan, San Luis, Santa Cruz, Santa Fe, Santiago del Estero and Tierra del Fuego, where cases have not shown a declining tendency yet.

(Source of the graphs: Martín Barrionuevo)

Ignacio Portes is The Bubble’s News Editor. Former Economy editor at the Buenos Aires Herald and The Essential, he has also written for publications such as Naked Capitalism, NSFWCorp and Revista Debate.