The draft of Argentina’s new criminal code aims to allocate more resources and focus on the war against drug-trafficking, the source of the problem, rather than chase minor offenders in the vain pursuit of better crime statistics. As such, more freedoms will be granted to recreational drug users and cultivators of marijuana. 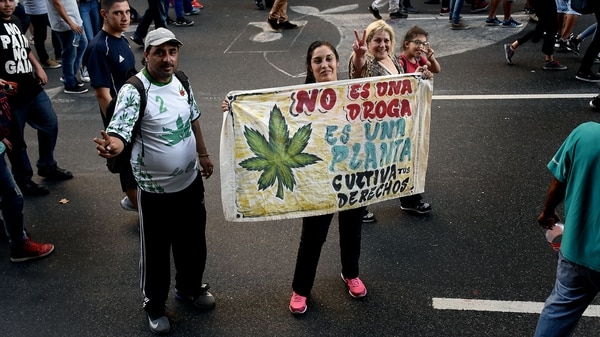 Federal judge of Criminal Cassation Mariano Borinsky stressed that it doesn’t mean consumers are “free” to do whatever they please, but establishes guidelines related to privacy, permitted quantities, and the effects on third parties.

This matter materialized from 540 articles that comprise the code and will be brought to Mauricio Macri on August 21st, which will later be sent to the Senate where it will be debated and sent to the vote.

The adjustments concentrate on Article 19 of Argentina’s constitution, which states: “The private actions of the men that in no way offend the order and the public moral, nor harm to a third party, are only reserved to God, and exempt from the authority of the magistrates, no inhabitant of the nation will obliged to do what the law does not mandate, nor deprived of what it does not prohibit.”

Over the years, the article has been cited twice in the Supreme Court. In August 1986, during the sentencing of Gustavo Bazterrica – guitarist from Los Abuelos de la Nada – and Charly García, who was arrested in his own home for having three joints and 0.06 grams of cocaine. Nearly 23 years later, it was referred to again in 2009’s “Arriola” case, where seven people were arrested in Rosario on the crimes of personal use of marijuana.

As it stands, if a person has a joint in their pocket, they can be arrested and sentenced up to two years in prison. Under these new proposals,  if  someone is caught with a joint on the street or has large stash of weed, penalties from the law will still be in force. However, if it’s in the privacy of one’s own home, small amounts of drugs would not necessarily be punishable. This idea that a “scarce amount” in the “private sphere” would be acceptable within the reformed code; it also allows the possession of coca leaves for personal consumption, including infusions or chewing.

Consequently, there has been a debate on the “vagueness” on what realistically is a “scarce” amount of marijuana. Some say its dependent on each case. Monica Napoli, toxicologist from Argentina’s Health Ministry, has tried to interpret this idea of “scarce” amount and has suggested that “[it] should be understood as the minimum dose that produces an effect, and this depends on the contraction of the active principle, that is, the cannabinoids. Some have 2 percent and others 50 percent. You have to look at each consumer: this needs to be taken into account when evaluating the issue, for example, their body weight.”

It is also important to highlight that punishment and sentencing will become harsher for “drug trafficking and drug-related crimes,” for example, drugs being passed around public spaces such as schools.

The increased sentencing will all depend on the severity of the crime. Currently, if a person cultivates or maintains plants for a drug organization, they face up to four years in prison. With the reform, this would be increased to up to 15 years imprisonment. The sentences for manufacture, production, and marketing for a drug trafficking chain would increase from 5 years to 20 years.

The bosses of international drug cartels, who will be hit the hardest if the penal code is reformed, could end face a 25 year prison sentence. Concentrating on the main organizers behind drug trafficking rings would perhaps get to the root issue, rather than brushing over the surface with minor arrests.

Looking at the statistics in a single prosecutor’s office in Comodoro Py, we can see the grand scale of resources wasted on arrests for personal drug use. In March 2017, after a 15-day period, there were 394 arrests for the crimes of drug possession for personal use, and only 8 grams of marijuana per detainee were seized. Clearly, this is hardly making a dent in the drug industry.

In the second half of March last year, there were 467 cases in total and 331 violating drug laws imposed by Article 19. Of those 331 arrests, 249 were detained due to personal use of drugs. Astonishingly, this comprised 53 percent of the work undertaken by Comodoro Py, illustrating how much time is wasted on detaining minor offenders, missing the more pressing problem of dismantling drug trafficking organizations.

While this comes as great news to many, others argue that these proposed relaxations would have major implications in Argentine society. From 2010 to 2017 drug use has doubled in Argentina from 0.8 percent to 1.5 percent. According to Agustín Salvia, research director of Social Debt Observatory of the Argentina’s Catholic University (UCA): “although there is also an alarming increase in the consumption of cocaine and synthetic drugs in the upper middle sectors, poor children, who fall into addiction because of the context of marginality, exclusion and lack of effective containment, continue to be the most affected.”

Bearing that in mind, this could perhaps lead to a deepening in the drug problem amongst society’s poorest groups due to the extended freedom. Yet the increase in supposed resources may contribute to crack down on the primary suppliers, and could decrease the amount of drugs within the country. But again, only time can tell.