Cristina, AMIA and the Investigation That Never Ends

The never ending story of the investigation into the tragic 1994 bombing of a Jewish community center in Buenos Aires has taken a turn for the sensational this week as President Fernandez was herself called to the dock by the head prosecutor Alberto Nisman. The high-profile lawyer accused Cristina of eliciting a cover up concerning the Iranian state’s alleged role in the horrific terrorist attack.

Two years after a 1992 armed assault on the Israeli embassy in Buenos Aires, the city’s Argentine Jewish Mutual Association (AMIA) was bombed. 85 people were killed and over 300 others seriously wounded, making it the worst single terrorist act Argentina has ever known.

In the years that followed, robust accusations were leveled at Hezbollah, a radical Islamic militant group based in Lebanon but with deep financial and military ties to Iran. This in turn led inevitably to accusations of involvement in the attack against the Iranian government by Nisman among many others, something it has always denied.

Since the atrocity, investigations have been launched and rubbished multiple times, with full closure and therefore justice seeming beyond anyone’s grasp so far. After the initial investigation was slammed by pretty much everyone (Nestor Kirchner called it a ‘national disgrace’ in 2005), Nisman was drafted in by the late President to renew the detective work, and he’s been at the forefront of this grim, necessary job ever since.

So what’s he actually accusing Cristina of? Firm like many in his convictions of the Iranian government’s own involvement, Nisman has presented a 300 page dossier (more a medium sized novel really) to the courts here in the capital, which he says offers proof that CFK gave assurances to the Iranians she would scale back the investigations into their own involvement as part of negotiations that happened in 2013. He demanded both she and Foreign Minister Hector Timerman, who closed a deal with Iran during the talks, be questioned before the federal court

“For being authors and accomplices of an aggravated cover-up and obstruction of justice regarding the Iranians accused of the AMIA terrorist attack”.

That year, Cristina’s Government forged a controversial agreement with Iran to conduct a joint Truth Commission and cooperate on the case. She championed it at the time as an “historic” agreement that would create “for the first time a legal instrument of international law between Argentina and Iran to advance knowledge of the truth about the attack.”

Nisman, however, claims that despite all this public self-congratulation, secret talks were also held between Cristina’s government and the Iranians, where she supposedly offered guarantees of what would amount to a whitewash of any evidence or disclosing of Iran’s own culpability if they were found out to be involved.

Since she took the reins in 2010, Cristina, also known as CFK, has moved Argentina far closer to Iran than many of her predecessors dared to. Exports to Iran stood at around US$ 300 million when she was sworn in and grew to over US$ 1 billion during her Presidency. Some analysts say that she has been looking to offer the olive branch of Argentine grain etc. for Iranian fossil fuels and bolster energy production (though Tehran has sent very little so far), others that she’s emulating Hugo Chavez, Evo Morales et al. in looking to flesh out the rising alternate power block in world politics that doesn’t necessarily need the US at its apex. It’s probably a combination of these things. At her blistering UN speech last year, she rightly pointed out the hypocrisy of most nations regarding Iran: how many former “enemies” including the US and UK were now scrambling to reframe it from a global outcast and “terrorist state” to a key player and potential ally in the Middle East, especially against new threats like ISIS.

All this geo-politics plays into Nisman’s own narrative that CFK had ample political motivation to make a back alley deal with the Iranians over the inquiry as a sweetener for a separate, diplomatic parley. However, we should be very careful before jumping on his bandwagon straight away and pointing the finger at her for a whitewash that hasn’t even happened yet: We are yet to see the commission’s findings.

The inclusion of Iran in a two-way truth commission may also be viewed as a practical step. Ever since the unbalanced Ahmadinejad was replaced by a more controlled leader in Rouhani, Iran too has sought to cool relations internationally. Since it undeniably has ties to Hezbollah, it may yet be willing to offer vital intelligence into the group’s presumed role to help better relations between itself and Argentina. It badly needs all the trading partners it can get, still handicapped by Western sanctions that many view as unproductive. 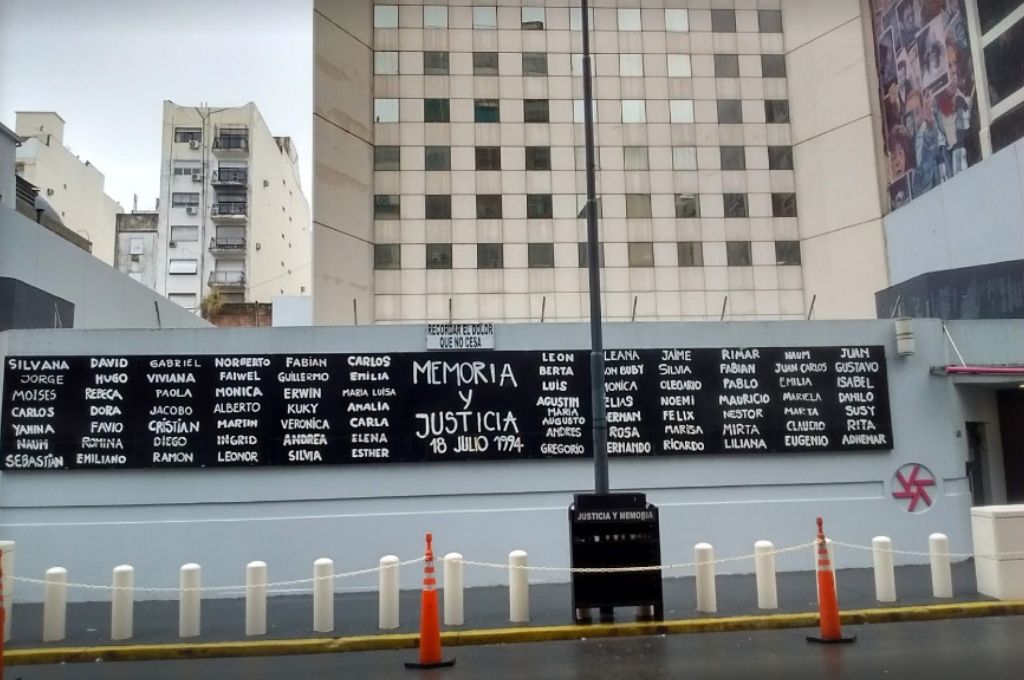 Memorial at the sight of the attack in Buenos Aires. Image by Nbelohlavek, via wikipedia.org

What’s more, the judge presiding over this marathon case, Rodolfo Canicoba Corral, has condemned Nisman’s dossier outright. He says that the prosecutor conducted his own “parallel investigation” without informing him at all, and that there are “severe irregularities” with his report. Even the original accusations of Iranian involvement and Hezbollah’s agency in the atrocity are questionable. According to an article ran by the BBC in 2005, one of its reporters in Argentina at the time highlighted the “repeated incompetence and deception” of the original investigation launched soon after the attack, commenting how no autopsies or DNA tests being performed, and the on-sight police acted at best casually in identifying the suicide bomber, still believed to be Ibrahim Hussein Berro of Hezbollah.

This murky fog of doubt that still hangs over the case of one of the saddest events in recent Argentine history makes rash judgments and accusations of guilt problematic. Prosecutor Nisman’s claims are drastic to say the least. Perhaps a more level head amid this Gordian knot of a case wouldn’t go amiss. Some of the long-suffering relatives of those killed in the attack have openly criticized Nisman since he made these claims, while others in the Jewish community have expressed understandable, ongoing concerns for their own protection from a state apparatus that’s far from perfect as it is.  It remains a very painful, open wound for Argentina, hence the attention this latest twist in the saga has generated. If anything is certain, though, it’s that the investigation will drag on for some time yet. As the event fades further into the rear view mirror, so too do the infinite nuances of what really happened and how. Although the investigation is very far-reaching indeed, the possibility of finding a definitive answer to these questions, and therefore justice for the long-suffering relatives of the victims, is still a long way off as the tragedy becomes more distorted by the hazy effect of time passing.

As for Cristina, we all know her government hasn’t always been a paragon of virtuous behavior down the years, but the presiding judge’s own rubbishing of Nisman’s report has probably bought her breathing space to avoid the dock. At least for the time being. So don’t draw up your Cristina-behind-bars memes just yet.