Climate Change in Argentina: What You Need to Know

Last month in the Néstor Kirchner Conference Room at the Ministry of Environment and Sustainable Development, activists and officials waited patiently to hear how the government, with the help of the United Nations and the Economic Commission for Latin America and the Caribbean (ECLAC), had evaluated the economic impacts of climate change in Argentina.

For those of you who don’t know (and I can’t possibly fathom how), allow me to introduce you to our melting planet:

The United Nations confirmed that the past decade was the warmest ever recorded, following a trend of increasing warmth since 1950. This warming has led to massive droughts from the United States to Syria to Australia, and increased flooding from the Philippines to South America. Fresh water lakes are drying up while sea levels are rapidly rising, and, as a recent NASA report confirmed, six Antarctic glaciers have begun rapid and irreversible ice collapse that is predicted to raise the planet’s sea levels by over a meter within the next two centuries, greatly impacting all coastal cities (including ours).

That and more existentially-terrifying climate data can be found at your nearest Google search bar.

Yeah, But How Does It Affect Me?

According to the report released by the Ministry of Environment, top impacts of climate change in Argentina include water shortages, changes to crop yields, and flooding.

If you want to see climate change for yourself, I invite you to visit Iguazú this week, which is suffering under record-breaking flooding.

And the report says it’s only going to get worse. According to the report, greenhouse gases will lead to more frequent and more extreme flooding events from Misiones to Buenos Aires. The capital, which broke its record for rainfall in 2013, is highly vulnerable to this flooding, which is expected to get more costly and more deadly. I probably don’t need to remind you of how chaotic Buenos Aires is when it rains.

Droughts in the West:

While Buenos Aires and Iguazú will be home to too much rain, the Patagonian provinces of Mendoza and San Juan are at high risk for debilitating drought.

This drought would have devastating impacts on the famous grapes of these provinces that thrive in an arid climate, but wither away in drought conditions. Current projections estimate that the global temperature will be warm enough to suffocate the grapes of Patagonia by the century’s end. Can you imagine Argentina without its wine? If anything is going to scare you about climate change, this should, because if that happens, then all we’ll have is Quilmes.

Melting Glaciers in the South:

This one shouldn’t be a shocker: warming global temperatures causes glaciers to melt. But just because it’s obvious doesn’t make the situation any less dire: The Upsala glacier, which was once one of the biggest glaciers in the world, has begun shrinking at the alarming rate of 200 meters a year, losing 8 kilometers so far in the past 25 years. Jorge Rabbasa, a scientist from The Centre for Science Research in Argentina, told Ciencia HOY magazine that as long as the rate of greenhouse gases continues, “it is very probable that between 2020 and 2030, most of these ice bodies will be gone.”

The economic side of the report adds a new level of price-tag gravitas. Without any substantial mitigation efforts or international aid, the report asserts that combined costs of infrastructure damage and lost agriculture revenue will require over 10 percent of Argentina’s GDP by 2030. By the end of the century, it will render the nation insolvent.

But it isn’t all bad – at least so far, this warmer, wetter climate has been a boon for soy, but at the cost of wheat, corn and forest. So at least we can rest easy knowing we’ll always be able to eat our soy burgers and drink soy smoothies on our soy couches from the comfort of our soy houses.

Mauro Fernández of the Energy Campaign from Greenpeace Argentina says that deforestation, or the practice of burning down forests to make rapid clearings for crops, is the biggest force behind Argentina’s climate change.

“It’s important to understand the role deforestation has in releasing greenhouse gases that cause climate change,” Fernández explained. “The two efforts we make to combat climate change is protection of forests and renewable energy.”

Deforestation is a global practice, most popular in Brazil, Indonesia and Russia, which packs a one-two punch against the global climate. Trees suck in carbon and release clean oxygen, regulating our air. When these forests are burned down, not only do we lose a massive natural air filtration system, but also decades or centuries of stored carbon are released, adding to our greenhouse gases.

Most of us think of automobiles as the culprits behind our carbon problems, but even in Argentina, which doesn’t even break the top ten of deforestation, carbon released from burned forests amounts to more than all of our cars, boats, and planes combined. Worldwide, deforestation is responsible for about 20 percent of all carbon emissions.

To combat this, Congress passed the Ley de Bosques in late 2007, which classifies the nation’s forests from “high conservation value” to “low conservation value,” in attempts to curb indiscriminate burning. Though the law was a success in awareness, Fernández sees problems in application.

“It’s not effectively serving the provinces, because they don’t know how to regulate the businesses,” Fernando said. “And there are business violating the law.”

Because of this and other reasons, Fernández urges the government to do more.

Especially when considering that the once-again, state owned YPF has control over the Vaca Muerta oil field in Neuquén, and that Chevron recently invested $1.3 billion to help develop this massive natural gas discovery, it’s hard to disagree with Fernández’s statement that “a more sustainable nation is possible, but not in the direction we’re going.”

What Is Being Done About It?

Though last month’s meeting over the report confirmed the consensus in Argentina that climate change is a man-made problem, which is more than some other nations can say (ahem, Estados Unidos), it didn’t bring many new revelations to the discussion or hope for substantial mitigation efforts.

Perhaps the most frank and revealing statement made in the entire four-hours was from the Secretary of Environment and Sustainable Development, Omar Vincente Judis, who reflected on his own meeting: “This is not new information, really, just confirmation. Confirmation of what we already knew was happening.”

Given that we now live in a world of record flooding and collapsing ice sheets, this richly-catered meeting was like the fireman who comes to your burning house empty-handed just to say “Man, that house is really on fire. Medialuna?”

Fernández, who, with Greenpeace, often lobbies the government on behalf of the environment, is an expert in this “too little, too late” government action.

“They’re trying, but it’s not enough. They could be doing so much more,” Fernández said.

“We believe that government officials at the highest level need to unite to combat climate change,” he explained. “People cannot create bottom-up change in such a short period. We cannot wait for a global consciousness.”

What We Can Do Now

In the face of such overwhelming data confirming the environmentally horrific, it’s easy to feel overtaken by an existential climate-fate malaise, sort of a “well, fuck it, maybe my Palermo apartment will be a beach-front property in a few years” state-of-mind.

“Sometimes the press will say: ‘sit, wait, and there’s nothing we can do,’ but this is false,” Fernández affirmed. “They bet that the people cannot change their ways, and we say, ‘yes we can.’ And science says, ‘yes we can.’”

Scientists at the National Institute of Agricultural Technology are claiming that while humans may not be great with change, cows could be better. In April, they invented a way to make the 51 million cows of Argentina emission-free: fart backpacks. Apparently, the methane from cow farts is enough to contribute to global warming (it accounts for an entire quarter of the methane the US produces every year). Methane is a greenhouse gas that these scientists have turned into a resource, capturing enough gas from bovine bowels each day to power a car for 24 hours. No word yet on how that might make your car smell, however.

It’s a small and strange solution, but it’s enough to give us hope. Because aside from that man-made climate change is happening now, there is one message that the science community is united behind: that, despite all that we’re facing, the horrific outcomes can be greatly mitigated with swift and sometimes creative action.

So when you hear the increasingly grave news on climate change, don’t cower under the immensity of the challenge ahead, but use it as a call to action. It’s no longer enough to sometimes recycle, or sometimes bike to work – it’s due time we turn the individual actions into the collective. It’s time we sell our governments on swift and sustainable action, showing them that we give a fuck about our planet (and man, we really don’t want to lose Argentine wine).

We all know you want that youth vote – so you should know the three buzz terms of our generation: gay rights, weed, and climate change. You’ve already got one down, and Uruguay took the other. That leaves you one untapped issue – take it and run with it.

I know, I know. Countries like the United States are really not pulling their weight. But fuck the status quo. No one has made news by following what the yankees do. You want to spur new industry, scientific research and positive press? Don’t wait until San Telmo is underwater; take on climate change now. Just imagine the global and local acclaim for being the first major nation to address this immediate and alarming issue head-on. We all know Argentina isn’t going to be a global leader in industry, so why not be the global leader on sustainability?

And for you reading at home, if you like your grapes and glaciers where they are, then you have cause enough to start fighting.

Let the alarm stir inside you, harness your fears and hopes, and, like the cows of tomorrow, turn your farts (or concerns for the environment) into something useful. 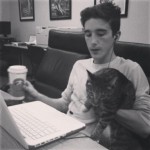