Chaos has broken out in the Buenos Aires neighborhood of Once following a city government operation to remove manteros’ vending posts from the streets. Manteros are informal street vendors who get their name from the mats (mantos) they traditionally use to display their wares.

This morning, at around 2am, Buenos Aires City police descended on Pueyrredón Ave. and Bartolomé Mitre Street during the Ministry of Public Space’s operation to dismantle the numerous vending posts, which are usually seen lining the sidewalk near the train station.

Informal vending in Once makes up one quarter of illegal sales in the city. Photo via Clarín

However, by 11.30am, more than 100 people had gathered in protest at Avenida Rivadavia and Pueyrredón, blocking the streets and demanding to meet with the governor of the City of Buenos Aires, Horacio Rodríguez Larreta.

For the last few hours, the police and mantero protesters have been at a stalemate. It has been reported that pieces of rock were thrown at police officers and fires started in the middle of the street. Police resorted to rubber bullets, pepper spray and a water cannon to remove protesters. Three injuries and at least two arrests have been reported.

Shops and other businesses in the area have remained closed for the day and traffic has had to be diverted from Rivadavia, which is a key avenue in terms of transit for the City.

Protesters hurled rocks and other missiles at the police. Photo via Telám

Things were looking messy this morning when the Buenos Aires Police Commissioner told the press “the situation is semi-under control” – not exactly the kind of statement known to boost confidence – but a meeting has now been arranged for 4pm between the manteros and Government representatives to try and find a solution. One spokesperson for the group of manteros announced to the press that they “will be deciding as a group” whether they will continue blocking the streets and an agreement has now been reached to “free up half of the street.”

In the face of today’s conflict, Clara Muzzio, the deputy minister for the Use of the Public Space in the City, has proposed to Once’s manteros that they register in Perón street to sell their products within a building. However, she made it clear that the Government would not be open to dialogue with “organizations” nor with “violent people”. The proposal has not yet been accepted.

Bins and garbage were set alight. Photo via La Nación

The operation that took place this morning is part of the Government’s latest crackdown on unregistered work in Argentina (aka working “in black”). This kind of informal employment, which saw a massive increase after the 2001 crisis, is thought to represent over a third of the country’s economy, rising to 37.9 per cent in Gran Buenos Aires and a huge 44.8 per cent in the northern province of Salta.

However, the President’s administration is now facing pressure from both investors outside the county and policy makers within Argentina to cut down on the numbers of people working informally in an attempt to strengthen the official economy. 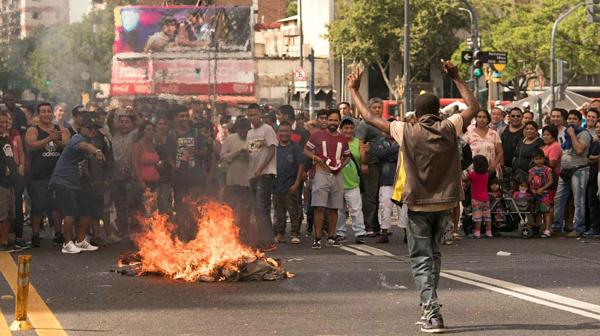 On the back of today’s events, the City’s attorney general, Luis Cevasco, justified the local government’s actions, saying that the manteros “never had authorization” to sell their products along the streets and that “the sidewalks are for walking, not for trading.”

He added that the neighborhood of Once serves as home to “a lot of clandestine and illegal activity and it has to stop.”

The problem inevitably comes when one takes into account that the informal market translates to the livelihoods of so many in Argentina, including those of the manteros. This is far from the first time that eviction operations have been met with conflict and it’s unsurprising – many workers see no choice but to earn their income in this way. The Government’s motivations may be clear for wanting to eliminate this kind of work but some critics are quick to cite the need to start providing alternatives on a wider, more viable scale.