According to Danish study Copenhagenize Index, Buenos Aires ranks 14th, just behind Slovenian capital Ljubljana, in the list of the world’s most bike-friendly cities and features as the only South American city in the top 20.

Having promised to build more than 70km of cycle lanes (due to reach 158km this year), as well as introducing free-to-use “ecobici” stations across the city back in 2012, it looks like Macri’s vision of a bicycle-filled BA is finally getting into gear. 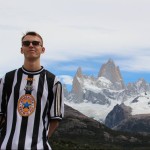