A Journey through Palermo’s Bookstore Cafes

Lattes and a bestseller go together like peas and carrots.

Palermo, a neighborhood renowned for its trendy bars and dingy nightclubs is also home to something a little less vivacious: bookshop cafés.

This week, for me, was one of those weeks. You know the ones, those in which you can’t seem to catch a break. With debit card fraud and international cell phones being blocked, I really did reach the end of my rope, and it was not a good look. Let’s just say I was in desperate need of a fix or something. Thankfully said fix was not drugs, but rather bookstore cafes (my mom would be proud).

Buenos Aires is the perfect place for bookworms and coffee lovers alike, being the city with the most bookstores per capita in the world and having some of best specialty coffee I’ve ever tried. So I figured; what could be better than combining the two to soothe my soul? I went on a voyage of discovery to try and find the best bookstore cafes in Palermo, so when you’re on the edge of a nervous breakdown, you know exactly where to go for some quick R&R.

Libros del Pasaje was my first point of call and at my peak levels of stress. I don’t know what it is about this place, but I walked in here a flustered mess and felt at ease right away, sipping my cup of coffee and nibbling on a nice (albeit a little dry) piece of carrot cake.

Before carefully selecting the perfect seat – close enough to the sparsely scattered plug sockets – I searched high and low for a good read. I felt a bit lazy so I picked out a book in English. The Bazaar of Bad Dreams by Stephen King? That’ll do. The title really spoke to me, probably due to all the negative connotations attached to it, which is currently summarizing my week so far.

Fully immersed in the collection of short stories, I escaped into a world where young Pete tried vodka for the first time, making me reminisce about the first time I ever tried alcohol. My parents were not too pleased with me raiding the drinks cabinet, that’s for sure.

The space itself is light and boasts a thoughtful ambiance, with calming background music, so I didn’t feel like I was seated in a silent library, too scared to even exhale a breath. What makes this place so great is its extensive collection of books and pretty damn good coffee. Despite the lack of plugs, the all-important WiFi works pretty well, and being hidden at the back of the bookstore made me feel pretty safe having my laptop resting on the table. Hey, Palermo isn’t just known for its leafy tree-lined streets, you know. 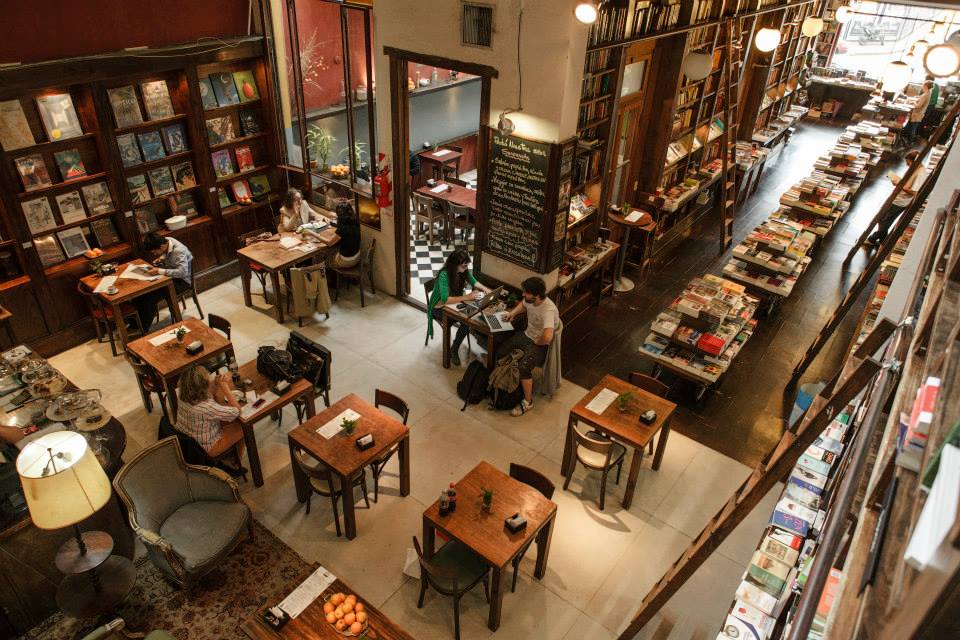 I struggled to open the heavy door to this place, but once I conquered that hurdle, I found myself in a large open elegant space, a far cry from the smaller, cozier bookstore cafes I visited. Just like Libros del Pasaje, it has relaxing background music, but it isn’t as busy.

The furniture itself in here is pretty basic, but does the job. There are plenty of plugs and the WiFi works perfectly. There’s just one problem: I probably picked the wobbliest table in the whole place, making it impossible for me to actually concentrate on my book, The Motorcycle Diaries. Sorry Che Guevara, I’ll have to pick this up another day.

In hindsight, perhaps I should’ve check the stability of the table before actually sitting down but then I felt too awkward to move to another table so I just decided to sit there and complain to myself in silence. I’m British, I’m sorry, it’s what we do.

Fortunately for everyone at Dain Usina Cultural, my irritability that was in full swing at the start of the week had started to ease at this point, so I didn’t feel the need to throw the table across the room in a heated rage.

I decided to give coffee a rest and just go for a nice glass of passion fruit juice and some scones. Everything was all well and good (I say while gritting my teeth, ignoring the rickety table), until I got my order arrived. Being brought up in Cornwall, England, I know how a scone works: split the scone, top it with jam and THEN the clotted cream. These tiny scones, no bigger than a miniature biscuit, were served with…cream cheese? I’m sorry for being a scone snob, but wtf? I guess it’s an Argentina thing.

Despite that, however, I dipped the warm pastry in the jam, and it wasn’t that bad. Putting all prejudices aside, the scones themselves were pretty light and scrumptious so I’m prepared to admit I was wrong.

Regardless of the small quirks, the staff are friendly, the amenities are good, and there’s an array of books from which to choose. Moreover, when I decided to explore the place a bit more, I actually found a really pleasant terrace, which I’ll probably check out next time to be able to focus on El Che (rather than the shaky table) and take in some rays of sun.

A lesser-known book cafe in Palermo, Balcarce – which I actually discovered by accident when walking from a friend’s house – is a small yet quirky space where I got some really good cake. This is probably one of the best spots for some downtime and to do some actual work.

I was pleasantly surprised by this cafe, as the bright orange umbrellas outside did spark out elements of tackiness. In reality, the place was anything but tacky. I guess you really cannot judge a book by its cover (pun definitely intended). Now, getting to the point, the Balcarce coffee is not my favorite cup of java, but it’s not bad at all. Maybe that’s just my improved mood kicking in. All I know is that it’s definitely better than the coffee at The Bubble HQ #sorrynotsorry.

I had the pleasure of trying a slice of Torta Balcarce, which originates from the town of Balcarce in the Buenos Aires Province (duh!). It’s a super sweet sponge cake, filled with dulce de leche, whipped cream, grated coconut, nuts, and so much more. All I know is anything with dulce de leche really does satisfy my insatiable sweet tooth.

Anyway, back to the books, this cafe joined forces with the chain Gandhi Books so there’s an impressive selection of publications at my disposal.

With that, I decide to push the cake to the side and delve into Un año sin amor by Pablo Pérez. Written in a diary format, I discover Pablo’s experiences dealing with HIV in Buenos Aires, an eyeopening, albeit tragic read, that allowed me to explore a topic I didn’t really know much about. Additionally, if you just want get some work done, the WiFi is very good, and there are an abundance of plugs scattered all over the place. The only downside is that the café is not hidden and sits in plain view of the street outside, so proceed with caution when using your laptop. A morning coffee and traditional medialunas, with some reggae playing in the background; I don’t think it can get much better than that. Total and complete bliss. Even on the walk here, I felt a shift in my mood.  The heavy weight of my body seemingly softened; it was like I pretty much glided here on top of a cloud as a sudden warmth of happiness took over.

As I entered I was greeted by everyone, and headed straight to my search for a good book. Their top Spring picks had recently been nominated and with that, I selected one of their recommendations: Liars in Love by Richard Yates. Let’s just say reading this book on heartbreak and the challenges of love reinforced my ideology that being single is best.

While burrowing into the misfortunes of other people’s love lives, I devoured my medialunas and drank probably the best coffee I’ve had along this journey. Maybe I’m slightly biased by this point, with the elevated endorphins rushing around my tiny body but either way, it all tasted good.

The vibe of this place is very similar to that of Libros del Pasaje, but unfortunately it also suffers from plug deficiency. At this point, however, I don’t care. I realize that this probably isn’t the best place to get work done, if my laptop isn’t fully charged, but for a total relaxation and an escape from reality, this is the place (especially in the morning).

Obviously, this isn’t in Palermo, but I thought it’d be an insult not to visit this architectural wonder, which was voted by the British newspaper The Guardian as being the second most beautiful bookstore in the world back in 2008.

I’m not great at getting around the city: according to Google maps it should only take seven minutes to walk to El Ateneo from the Callao Subte stop. It did not take seven minutes, though, not even close. After walking around in circles for a good part of 40 minutes, I finally made it. And let me just say, it was completely worth the trek.

Stepping into one of the most beautifully designed bookstores I’d ever seen, it really is as splendid as its name.The exasperation that I once felt at the beginning of the week had completely subsided by now and a great deal of nostalgia flooded my body, with old theater’s historic architectural elegance illuminating from each nook. It has been completely transformed into a forest of books, containing reads from pretty much every genre.

I entered El Ateneo with the intention of finding a map and guide for Patagonia. Considering how lost I got on my journey to the ritzy neighborhood of Recoleta, I thought a map may be useful for when I head on my adventures down south and am considerably more off the grid.

I scoured the shelves until I found the Patagonia Map Guide, but at this point I had Kaffetørst. My immense craving for coffee couldn’t even be explained by English terminology. This Norwegian term essentially explains that craving you get when you’re in desperate need for coffee. Thanks, Norway. With that, I made a beeline to the café located on the former stage of the theater.

Though this is an amazingly stunning place, it is a very tourist-heavy spot and all I could hear was background chatter of the swarming extranjeros taking a peek around. However, the locals have clearly clocked into this and have found quiet corners in the many reading rooms to try and escape the noise. The true bookworms, however, are completely lost in their own little world, seemingly oblivious the fact that they were in a public place, and taking to the floor between the book shelves.

I think this a great place to visit, and perhaps buy a book, but I do not feel that this is somewhere one can just go and sit and chill out or do work without being in the background of someone else’s Instagram photo. Maybe I shouldn’t have come on a Saturday.