Argentine Democracy And A Peronist Economy

[DISCLAIMER: The opinions expressed in this article represent the writer’s and do not reflect those of The Bubble.]

The emergence of democracies in former dictatorships, theocracies, and aristocracies is widely considered evidence of humanity’s progress towards superior social organization. From an economic standpoint, democracies for all their quibbling still consistently demonstrate the following strengths (hat tip, Dani Rodrik):

What do we do then, with Kirchnerism?

In many circles, President Cristina Fernández de Kirchner is pinned up as the primary source of Argentina’s many woes. And while she is miles away from blameless, Cristina is possibly even further from the root of Argentina’s cyclical and seemingly inescapable economic demise. She is nothing more than the current face of Peronism, a political and economic model that vastly limits her alternatives. 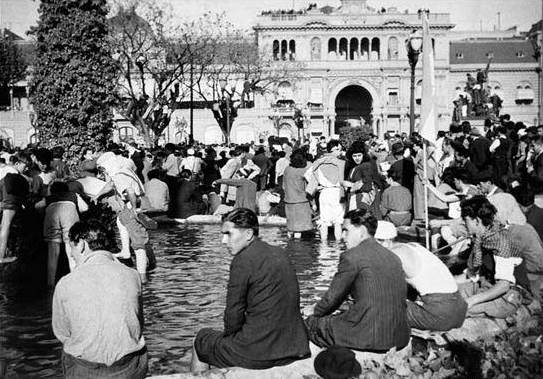 Peronism was thrust onto the main stage of Argentine politics on October 17, 1945, and is based on the social and economic inclusion of the poor. The symbology that surrounds Peronism’s birth is essential in understanding how Argentina arrived to it’s current predicament. On that hot October day over fifty years ago, Juan Domingo Perón’s poor and working class supporters mobilized in a group of over 300,000 in the Plaza de Mayo to demand their leader’s release from prison. These workers fought the heat by taking off their shirts, earning the name descamisados (shirtless) and cooling their hot feet in the fountain of the Plaza (or putting las patas in la fuente). It goes without saying that shirtless, shoeless workers were not a sight seen before in front of Argentina’s presidential palace.

Perón was famous for rolling up his sleeves to show his supporters that he was one of them. He traveled Argentina in a train called “El Descamisado”, gaining supporters throughout the country leading up to his election to President in 1946.

PERONISM AND THE POOR

Perón succeeded politically by identifying with the poor and working classes, but he mismanaged and indeed abused how this idea matured. Rather than elevating the poor by recognizing and nurturing their human dignity, he laid the groundwork for a culture based on a lie – the dignity of poverty.

Government measures to help the poor must be designed to lift people out of poverty in a sustainable manner, period.  Instead, Peronism and its successor Kirchnerism blame the rich for the plight of the poor and provide expensive and unsustainable handouts to ameliorate the experience.

Peronism has not only taken root in the hearts and minds of the people, it is very firmly entrenched within the political system itself.

In addition to winning the votes of an electorate dependent on the government for subsistence, Argentina’s leader must face what can only be described as the feudal system of Buenos Aires Province. The province is home to 15 million people, over a third of the entire population, and is divided into roughly 135 municipalities, each governed by a loyal Peronist mayor.

THE CRISIS WE’RE LEFT WITH

The visible effects of Argentina’s economic mismanagement, namely inflation, unemployment, and multiple exchange rates, are the unavoidable outcomes of unsustainable and expensive measures Argentina’s leaders must either maintain or risk losing power.

King and Queen of Thieves, both sporting tights (image/IMDB & InfoBAE)

Peronism today has evolved into something that looks like a class struggle that pits the poor against the rich without explaining why. Cristina Fernández de Kirchner is viewed by supporters as a Robin Hood-esque character (and not just because they both wear tights to work.) She snatches wealth from the greedy hands of domestic and international fat cats in business and redistributes it into the hands of needy mothers with hungry children, and protects Argentines from destructive foreign interests.

But what happens when the fat cats go home, or run out of money? Argentina’s government can pull resources from the following places:

It boils down to the basic concept of spending more money than you can make, and cutting off long-term sources of potential financing in order to make short term ends meet. Businesses have been fleeing Argentina since 2010 due to impossibly high taxes, the inability to repatriate gains, and the inability to acquire imported inputs. Agriculture exporters hoard their products rather than fork over ungodly sums to the government. Foreign investors sit on the sidelines waiting for something to break, and Argentina has to pay extremely high interest rates to lenders.

And so they print pesos, fanning the fire of inflation and putting off the inevitable day when the money runs out and the crisis begins.

Crisis won’t hurt the fat cats or the vilified international business interests, it will be borne on the shirtless backs of the workers with their feet in the fountain and their children. These are already the groups feeling the tightening of the noose around Argentina’s neck as prices rise faster than wages, and fewer jobs are available. And they will be the ones left homeless, sorting through the trash trying to survive in the aftermath no matter what form this particular monster of a crisis happens to take.

PERONISM IS ALSO HEADING FOR A CRISIS

Political discussions around dinner tables worldwide are stuck on the topic of what happens to Argentina when Cristina goes in 2015. That discussion should instead focus on whether or not Peronism can find and support a leader who will end the dumbing down of the electorate and stop venerating the dignity of poverty.

A recent article criticizing the NGO Un Techo Para Mi Pais (a roof for my country) was cleverly-titled Un Cheto Para Mi Pais (a snob for my country). The author smears the middle-class volunteers and their corporate funding for building emergency shelters and calling them homes, and for using the exercise to assuage upper-class guilt and build a positive corporate public image, respectively. The article is exceptionally well-written, and demonstrates to a T one of the fundamental flaws inherent in Peronism. It vilifies businesses that make money and anyone who has money, without any mind to the inescapable reality that it takes money to pay for social programs.

Emerging democracies in Latin America will always look different than their counterparts in North America or Europe. Culturally, Latin American countries look for a caudillo, a charismatic and strong leader that can be followed and looked to for every need. The problem is when this caudillo leader becomes a modern Don Quixote, tilting at the windmills of corporate greed and an antiquated concept of the bourgeoisie.

Today in Argentina, it is a reality that democracy will result in Peronist leadership. The question is whether or not that leadership can introduce a modicum of economic common sense into spending on social programs without losing the support of the governed.

All eyes are now on Sergio Massa, whose rival Peronist party Frente Renovador (Renewal Front) won over the Kirchnerite Front for Victory (Frente para la Victoria) party in the 2013 midterm elections. Massa denounces export tariffs and doctored economic statistics, but is quiet on the twin elephants in the room named subsidies and social spending. If those elephants are not to trample the country they must either be downsized, or Massa must come up with a sustainable way to feed them.

Argentina is heading for a crisis, and the democratically elected Peronist who succeeds Ms. Kirchner will be responsible for picking up the pieces. How this plays out will have implications not just for Argentina, but for democracy in the region as a whole.

From a historical perspective, democracy is in its infancy in Latin America. For ideological constructs to take hold, like everything else, they must demonstrate the results that they promise.

Democracy is considered government by the people, but the reality on the ground is that it depends heavily on the underlying and often heavily entrenched political institutions. While imperfect – like most – democracies in Latin America will tend to look different than in other places in the world. They will be led by orators who deliver lengthy, heated discourses to throngs of voters looking for salvation in addition to political leadership.

In Argentina, it is the responsibility of Peronist leaders to recognize that while today they are the relatively uncontested will of the people, they have the responsibility to see the bigger picture and address the very real economic problems that are tearing the country apart. Democracy cannot take down Peronism, but Peronism can undermine Argentine democracy.

Bianca Fernet is the answer to economists who act like economics is too complicated to understand. She is the antidote to the rather mean old men who get their jollies spouting off buzzwords that make you feel inadequate. Bianca enjoys drinking, math, literature, travel, and drinking, and would use her free time to pursue these interests if she had any.

Argentina’s Investment: To Be Or Not To Be

Perception of the current government both at home and abroad is still fragile.

But is this growth enough?

The Big Macri Index Is Ruining My Love Life

ShareWell it’s 2017. Here in Argentina we find ourselves awash in the bitter fruits that have sprung up from the […]

Is Macri’s Claim That He Is Reducing Inflation True?