Adore Delano in BA: An Interview with the ‘Drag Race’ Icon

“I love your crescent moon. I’ve got one tattooed on my butt,” says Adore Delano, commenting on my necklace. I say I know, I’ve seen it, and we both laugh. It’s Friday, December 7th, the night of her show at BAGFest and we’re backstage right after the meet and greet. Delano was a finalist on RuPaul’s Drag Race season 6 – considered by many the best season – and before doing drag, competed on American Idol as Danny Noriega. Last year, she performed two shows at Crobar and rocked out perhaps more than any other of Rugirl Buenos Aires had ever seen.

Adore does in fact rock. Unlike other queens who are known for their glossy lipsyncing talents, Delano is a natural born singer known as a spontaneously badass rocker chick from LA. Her third and most recent album Whatever came out in 2017 and is full of catchy, energetic punk and grunge-influenced tunes that perfectly convey her attitude, essence and emotion. My personal favorites are Negative Nancy (which also has a music video that oozes “teen spirit”), No School and Princess Cut.

It makes complete sense, then, that the album was written during a time she had relocated to Seattle, the birthplace of grunge where legendary bands such as Nirvana, Pearl Jam, and Soundgarden were formed. “I went there to just, like, live out my whole entire fantasy,” she said.

When we get together, she’s wearing thigh-high black boots, fishnets, ripped jean shorts, and an army jacket. She wears a choker around her neck and hyper-blue contact lenses, giving her a kind of feline energy. Incidentally, one of her many tattoos is the word “MEOW” on her right hand, one letter on each finger. She is gorgeous and the makeup is flawless: smoky eyes, some glitter with tiny hearts, and blood red lips. She appears chill and relaxed.

You recently tweeted that you were absolutely happy at the moment. Can you tell us more?

We just finished a tour in England and Ireland, the ABCD Tour with Bianca del Rio, Courtney Act and Darienne Lake. I had the pleasure of traveling with my cousin John and Bianca’s friend Jamie as well. We don’t all get to experience that whole vibe too often. We’re all like different petals of a flower. And when we spend a certain amount of time with each other, I just feel recharged. So I felt really happy after that.

What does that mean to you?

While growing up, there was always something “in between” about myself. Some people would say I lived my life as a girl for about six years, from late in middle school until high school. But at the time I was experiencing that, there was no language for it and no conversation about it. I was just kind of like the weirdo. People called me “Tranny Norgayga,” that was my name. I was actually like “Cool whatever, I’ll take it.” Or they even called me RuPaul… It wasn’t funny at the time. I just knew there was something about myself that had no language to it. Now I’ve had a lot of growth that has allowed me to expand and understand the gig more.

I prefer whatever the fuck people see me as. Courtney Act and I always talk about this and basically, we’re comfortable with whatever people are comfortable with. Maybe that comes from being insecure growing up. Although to be honest, I do kind of cringe when somebody categorizes me as one or the other but it’s never physically said out loud. Makes me want to throw something.

How did singing help you through dark times?

I can remember being as young as 12 years old writing bullshit music that made no sense, but it made me feel better about myself. Like I said, there was no language for what I was feeling as a kid. I grew up in a predominantly Latino, Hispanic community that was masculine driven. It was just a really fucking confusing time in my life.  And music provided an outlet. I learned melody from the Spice Girls in their a capella moments. Then I would make my own melodies and I found an escape in that. Some people find an escape in poetry, but I would find it in making sounds.

When you wrote the song “27 Club” referencing the group of musical icons such as Kurt Cobain and Amy Winehouse who died at age 27, you were going through some dark times.

How did you come out of that?

What have you learned from difficult times you’ve been through in general?

Well, I feel like three different people since last year. I don’t know. I still have a pretty short temper. But basically I’ve learned to just not to get caught up in bullshit.

What do you think punk rock and drag have in common?

They’re both the exact definition of going against the grain. It’s pretty much the same thing to me.

Do you think drag provides a link between the trans and gay communities?

Absolutely. Gia Gunn recently did a fascinating interview that explains she realized she was a trans woman when she started doing drag and became a showgirl in Chicago. I can identify with that as well. Drag completely helps you explore your gender and allows you to do so in a freeing, kinda liberating way as well because you’re performing in front of an audience.

At this point I’m pretty much the same. There’s a blur in between but…I mean, with Adore you can get away with more. It’s like a superhero mask but yeah, we’re the same.

About an hour later, it’s show time. And just like last year, she rocks. During the first set, she covers Bohemian Rhapsody and does two songs from her previous album, including I Adore You, all while thrashing around onstage with electric energy, at times falling to the floor, flipping her hair or swinging and twirling the mike. She fearlessly opens her arms, falling offstage into the audience for some crowdsurfing.

During the second set, she emerges wearing a pañuelo verde around her neck, expressing support for the legalization of abortion in Argentina. “Don’t you ever let a fucking man tell you what to do with your body,” she declares. “Whether you’re a woman, trans, human, whatever the fuck you are, don’t you ever let a privileged man tell you what the fuck to do with your life.”

And then she delights the audience with a cover of Heart-Shaped Box by Nirvana. Most of the audience is younger, so maybe not everyone recognizes the track. But those of us who do are shook, we are gagging, we cannot believe it. Hearing her voice sing those words sent chills up my spine, it was beautiful and moving. I think I had an Adore-gasm. 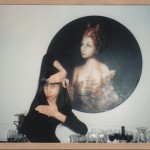 Born and raised in DC, studied Journalism in Buenos Aires while working as a freelance translator. Her first article ever published was about Nyan Cat. Most of her pieces revolve around music, culture, and nightlife. She loves drag, wearing cat ears and compulsively photographing doors.